Our work as consultants is to be one step ahead of the client. We should know what’s most important, when it will happen and what the consequences are likely to be. Aside from Covid-19, we are facing increasing climate challenges. These will be taking centre stage during 2021, both in policy work around the globe, in the media and in people’s minds, with increasing expectations on us to keep track on what’s happening, when and why. Sweco’s sustainability chief Mattias Goldman shares the most important dates for the coming year.

The European Union Green Deal is now entering into force. It is key to achieving the European Union’s climate goal, a 55 percent reduction in climate impact by 2030 compared with 1990 and climate neutrality by 2050. The Green Deal means huge investments in environmentally friendly technology, support for innovative industry, conversion of the transport sector, phasing out of fossil fuels in the energy sector, more energy-efficient buildings, and expanded international cooperation. The fair adjustment mechanism alone will contribute at least €100 billion to the regions facing the most difficult adjustment. This is relevant to everybody!

In the US, President Biden immediately started with a strong climate and sustainability agenda, with a range of executive orders. The first key date is February 19 when the United States re-enters the Paris Agreement. The Agreement states that each signatory country must now submit its first “Enhanced Action”, with intensified climate commitments. How much of Biden’s Build Back Better climate platform will be part of this, will be of global relevance to business and politics.

China is the world’s biggest emitter of greenhouse gases, and their recent decision to become climate-neutral by 2060 has huge global significance. How this is to happen will be known through China’s 14:e five years plan and their vision for 2035, to be unveiled during their congress in March. This will have a huge impact on the transition from coal power to sun and wind, for the conversion to electromobility, and for the shift to a circular economy. We can also count on a Chinese research facility for the climate, a national emissions trading scheme, and major investments in climate-neutral cities.

May: UN and biodiversity

The global Biodiversity conference, COP15, is held 17-30th of May in Kunming, China, but in practice will be mainly digital. This is the first major UN meeting since the pandemic, and the first after the reports that one million species out of the eight million on the planet are facing extinction unless the situation is quickly reversed. The proposed agreement includes protecting 30 percent of land and water, a strong focus on food security and survival for the most vulnerable, but also a direct link to climate issues.

Each EU memberstate must now report to the European Commission what important legislative changes are required to achieve the climate goals. This will be an excellent “stocktake” to keep track of what happens country by country. At the same time, the Commission will indicate what legislative changes they see as needed to meet the climate goals. These will then be part of the long-term climate plan, and is a great key for keeping track of where the EU is heading in climate, energy, the environment, infrastructure, agriculture, and research.

Water is on its way to become the next big sustainability issue. It will be in the spotlight during the World Water Week the 23rd-27th, held in Stockholm but with on-line participation from around the globe. This year’s theme is “Building Resilience Faster”, focusing on our vulnerability to rising sea levels, heavier rainfall, prolonged drought, or saltwater intrusion into our drinking water. This part of climate adaptation does not get much attention during the climate conferences, but it is crucial, not least for our cities.

How the corporate sector develops climate friendly business models is key to meeting the sustainability target, and is the focus on the Climate Week in New York, to be held September 20th-26th. Keep track of this conference and you will know where leading business is heading, sector by sector and around the world. This Week also serves as a warm-up for the UN climate summit COP26 in November; the level of concrete commitments in September will determine how far we will get two months later.

To what extent can geoengineering be part of the climate and sustainability solution – and what threats does it pose? This is the focus of the global Potsdam conference Climate Engineering in Context on the 5th-8th of October. Some areas are becoming mainstream, such as carbon capture and storage (CCS/BECCS) and direct air capture (DAC), while others may remain fantasies or nightmares, such as huge mirrors in the sky.

November: Climate highlight of the year

For the first time in 25 years, there was no UN climate summit in 2020. That is why the COP26 in Glasgow on the 1st-12th of November will be the sustainability event of 2021. At the summit, the last part of The Paris Agreement will be agreed upon, including an emissions reduction mechanism to follow the Kyoto Protocol CDM. Continued international climate financing also needs to take a step forward. At the same time, the world will compile the “Enhanced Actions”, to be submitted by each country that has signed the Agreement, to determine how close to the agreed climate targets we are. Hopefully, we will see some national initiatives to move forward, including the Brits themselves, who after Brexit want to show that they have not lost climate momentum.

Sadly, the pandemic stayed with us for a long time, meaning that the first time the countries around the world can truly focus their initiatives on long term rebuilding of the economies is in the budgets for 2022. These are typically presented and discussed in the autumn of 2021, with a final decision in December and entry into force on January the 1st. In these budgets we will find out to what extent and how the countries, regions and municipalities that we focus on really deliver on the promise to “Build Back Better”.

…And then it is a new year again, with new guidance to sustainability to follow from yours truly. 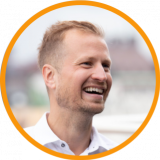 Certifications – creating a valuable asset for your company

8 tips on how to attract employees and subcontractors

Seamless sourcing – find the right skills regardless of employment form

Want to win the battle for talents? Invest in your leaders

How a consulting firm can become a cloud service